Young Justice Season 4 continues as the drama on Mars heats up, literally and figuratively, and there’s one hell of a shocking conclusion that Dan and Ethan are still trying to come to terms with. So let’s dig in, but first, some non-spoiler thoughts.

Ethan: We’re back and wow, this season of Young Justice is off to a hell of a start huh? We’re only 4 episodes in but even with just that we’ve had some of the best character work the show has ever delivered. I’m excited to dig into this episode, especially the final few minutes. Dan, what did you think of this week’s episode?

Dan: Another week of world-building on Mars!!! I really love how they are fleshing out this story, its characters, and world. I love seeing the growth of all of these characters we have known for so long as well!

If you haven’t watched this episode yet, stop here before you hit the spoilers!

Dan: Young Justice is constantly pulling from its own history in storylines and character elements. Everything feels connected without many threads trailing off to nowhere. It feels like every arc we have seen in previous seasons has been building to something. Different elements are continuously introduced but older ones are not forgotten. For example, the attack in this episode was brought to you in part by Apoklips for M’comm’s role in things that happened on New Genesis in the previous season.

The show has been building its own unique version of the DC universe and making it completely its own. It’s so interesting to see it on such a large scale. We had some elements of it in Justice League Unlimited but this feels like the evolution of that with a lot more going on thematically. Characters grow and change like they do in the comics. It all keeps me very connected to it. What’re your thoughts on it as compared to DC Comics?

Ethan: The evolution of Justice League Unlimited is the perfect way of describing this, and something I’ve long thought to be true since YJ’s original run. Getting to see everything play out and build on itself is a delight. The fact that we can trace back a lot of what we see in Martian society this episode to Season 1 is wild. Even wilder is that it’s consistent. There aren’t glaring continuity issues like you may see in the actual comics. This is definitely a positive to having a guiding voice, in this case, Greg Wiseman, be at the forefront throughout the show’s run.

Can we talk about Apokoliptian Tech for a Moment? 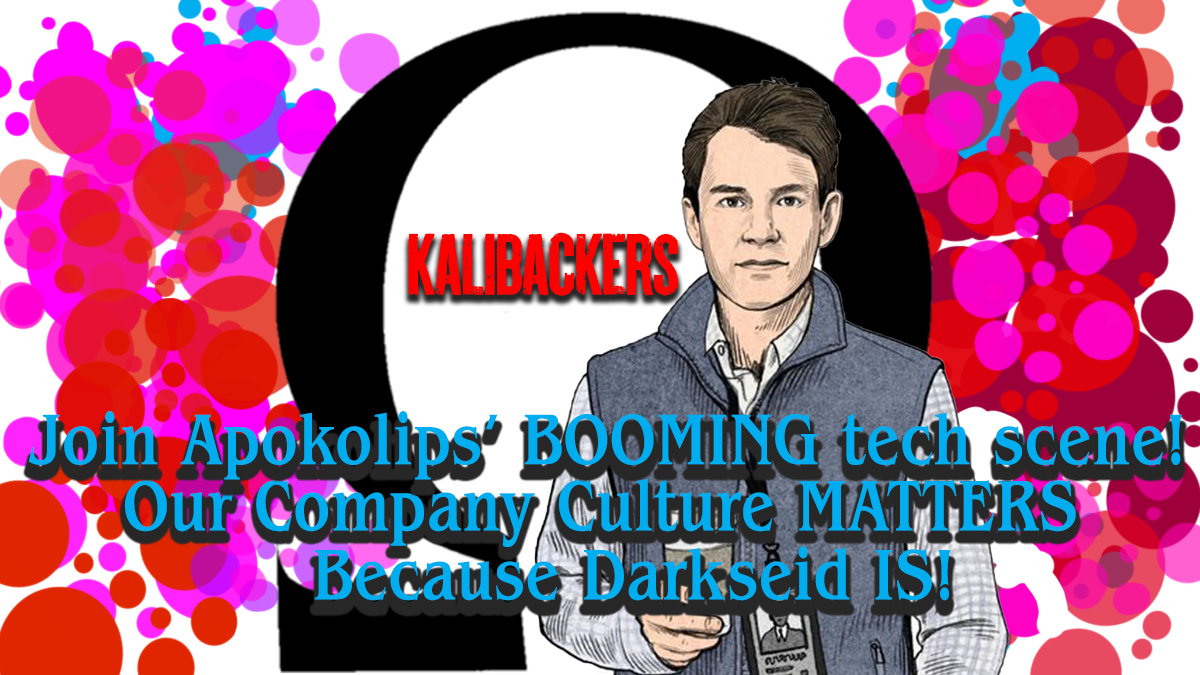 Dan: There is a major weapon in the episode that is derived from Apokiliptian Tech. I feel like there are so many stories about Apokoliptian tech in comics and especially DC Cartoons. It’s a phrase that is just stuck in my head and I want to paint you a mental picture. Darkseid, ol’ fire and brimstone, spends most of his time standing on his balcony above the fire stacks just being ominous right? Now, the suggestion that Apok Tech is super-advanced insinuates that there is an Apokolips silicon valley. There are Apokiliptian tech bros out there setting up start-ups on that hell planet. Their offices, much like Earth’s tech start-up scene, are full of pompous sociopathic leaders who offer “benefits” in lieu of proper pay and the promises of a “positive company culture” that is as toxic as one of Granny Goodness’s training seminars.

Ethan: Umm, you good Dan? That was an odd tangent to go on. I can’t believe you photoshopped something based on a start-up joke you came up with in the moment. Anyway, Apokiliptian Tech? Very cool, hoping we get some *PING*’s from the Mother Boxes soon. That would be dope.

Ethan: So… Did not see that coming. While the various castes of Martian society gather to celebrate Prince J’emm J’axx’s birthday, Conner, M’gann, and Gar continue their investigation into the King’s murder. They discover that the Sorceress-Priestess S’yraa S’mitt (who was to officiate Conner and M’gann’s wedding) is responsible. With her now arrested, the celebrations continue, until Conner, thanks to his super-hearing, picks up something happening below the auditorium the crowds are gathered at.

And this is where the shock of the episode is delivered. Being planted beneath the celebration by a still unknown person is the Apokiliptian bomb designed to kill the Red and Green Martians that was given to M’comm by DeSaad. With no way to disarm it, Conner instead breaks through to the lava flowing below the auditorium, where he safely burns away the virus within the bomb. But, also within were trace samples of Kryptonite, and Conner falls into the lava. M’gann can’t pick up his psychic trace. It seems as if Superboy is dead.

Now, first off, I can’t say for definite I believe that Conner is dead. Young Justice is a show built on twists and turns, so there’s a chance he’ll be back somehow. Maybe this is all a ruse, maybe he’ll be magically resurrected (perhaps with a mullet?), maybe the Legion members who have been trying to avert some tragedy will save him. I don’t know, but what I do know is that in the moment, seeing M’gann’s reaction, it hurts. If this is for definite, the rest of the season is gonna have a hole in its center as one of its best characters is no more.

What were your thoughts on this shocking conclusion, Dan?

Dan: Well after I went into detail about how much I love this relationship, my thoughts are really just a lot of screaming. I cannot believe what happened and was just taken aback. I do love that Young Justice never throws its punches lightly. Wally died early on in the show and has not been brought back, so clearly, the creative team doesn’t play games.

What was even more interesting is that when Superman came to help, he was weakened because there was kryptonite in the air. It’s clear that Apokolips is looking to help take as many players off the map as possible to clear the way for whatever they are planning.

In which Dan and Ethan discuss the small character moments that play over the end credits.

Dan: I need to be alone right now.