Velvet Was the Night by Silvia Moreno-Garcia is set in 1971 Mexico City, during a time of protest, violence, and political unrest. Maite is a secretary that lives a pretty boring and mundane life, but when her neighbor Leonora goes missing, Maite will embark on a journey that goes into the deepest corners of the political movements of the time.

As the search for Leonora intensifies, Maite and Elvis will find themselves caught in the action during one of Mexico’s less well-known dark periods.

Today, Cass Arellano (a Mexico City resident) and Katie Liggera (an outsider to the city and its history) have given themselves the task of discussing this fascinating novel. 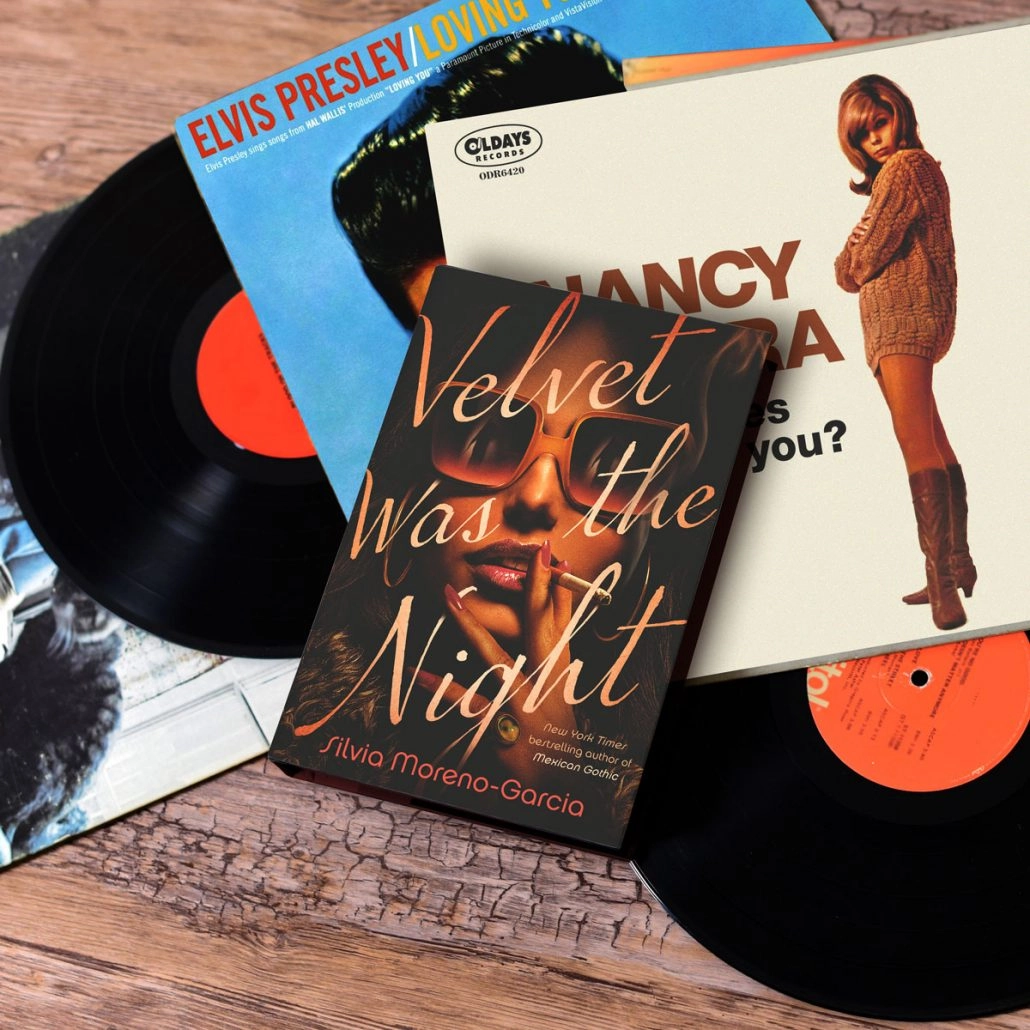 Cass: I’ve been living in Mexico City my whole life. I love reading stories set in it, but finding such stories outside of Mexican publishers is pretty rare. That was what first caught my attention in Velvet Was the Night.

Katie: Velvet Was the Night was my first introduction to Silvia Moreno-Garcia’s writing. I was also unfamiliar with some of the topics, settings, and historical context discussed in the novel. I haven’t read many noir books either, so Velvet was definitely a title out of my usual genre comfort zone.

Cass: You finished reading this before me and told me it was a slow burn which definitely rang true to me. It especially felt like it had a really strong first chapter and then slowed down for a bit before things picked back up. That being said, my love for the first chapter probably comes from my knowledge of the events that the chapter is set in (a skirmish known as “El Halconazo”). Fun fact, my mom was at the place it happened just hours before it occurred.

Katie: I agree that the first chapter initially set an immersive, engaging tone I thought would carry over to the subsequent chapters. Elvis was an immediately likeable character, unfortunately entangled in the politics and historical conflict plaguing the country. Moreno-Garcia did a great job setting up background related to the events while establishing the main characters. However, I did find myself revisiting a few passages and even looking up the Dirty War online because I had no familiarity with the events. Then, the pace slowed and the slow-burn began. I think having that personal knowledge about the events probably made a difference in your own initial reception to the books’ opening, whereas I found myself thrust into a world I didn’t quite understand at first.

Cass: I think my knowledge of the historical event did enhance some part of the book, but surprisingly the Dirty War isn’t talked about that much in history classes, so it was really interesting to see a fictionalized account of it, and I definitely learned some new things. What I also loved about the book was the way Moreno-Garcia described Mexico City; it felt like it was a character itself. I actually went to some of the places mentioned afterwards and I could see the characters walking around.  I would love to hear how you experience that.

Katie: Wow, I would love to visit any of the places Moreno-Garcia mentions here. That sounds like a beautiful way to further your enjoyment of the novel. Well, obviously, I learned a lot about Mexico City, from history to culture to descriptions about the environments. I liked how Moreno-Garcia used the city as both a character and a sort of personification throughout. She mentions how the city “slept” when describing Elvis dreaming about Maite dancing to a record. Moreno-Garcia absolutely captures the vibrancy, the grittiness, and the influential role places take in the events unfurled during the book. Her depictions of locations provide atmosphere and mood relevant to the conflicts the characters undergo. Places in Mexico City have more than thematic meaning here. You’re totally correct in observing how Mexico City essentially is a character along with the main protagonists.

Cass: Talking about the main characters, I think they are a really strong part of the book, especially Elvis. Like you said, he was extremely likable, and his backstory felt real, no matter how tragic. His aspirations also really gave some big stakes to his story and made the ending far more surprising. As for Maite, even though I also like her, she was a bit less interesting. But I do think she is a great point of view character being an outsider to the whole mess, and someone who is yearning for adventure, when she might as well be the reader. The rest of the cast of characters is also interesting, I was especially a fan of El Mago, and Moreno-Garcia does a great job of building the myth around him.

Katie: The characters definitely counteracted pacing issues I found within the narrative. You’re right in mentioning the outsider/insider juxtaposition. Elvis, though inside the drama and boiling conflict, still retains a huge amount of individuality. His character growth was evident and, like you said, extremely surprising, considering how the main events play out in the end. Even though music is a primary connector between Elvis and Maite, I felt I saw music impact Elvis’s character more so in an illuminating way. He took Elvis’s name because he looked up to the singer! Maite annoyed me a bit, if I’m being honest. I understand the way she’s written, but her obliviousness was almost hard to believe. Yet, I feel completely sympathetic. Maite has low self-esteem and actively chooses escapism with her romance comics instead of participating with a world that doesn’t offer the fantasies comics provide. I ultimately preferred Elvis’s chapters and his growing obsession, but appreciate Maite’s necessary point of view. Also, El Mago was a standout secondary character for sure.

Cass: I’m glad you mentioned music because I felt it really helped set the atmosphere and mood of the story (have you heard the playlist? It’s sooooo good, I’m listening to it right now). I also felt it was a smart way of connecting Maite and Elvis. Firstly, because music was really important in Mexico at the time of the student protests, but mostly because both Elvis and Maite have vastly different backgrounds, but music has always been a universal language, and that is even more noticeable here seeing how music was one of the things groups like “Los halcones” and the students had in common. I also felt that music worked so well as a connection because the vinyl collections of Maite and Elvis are some of the few items both really care about.

Now that I have mentioned the atmosphere, what do you think of the noir aspects of the book?

Katie: I have looked through the playlist, and there’s a multitude of great music included. I’m familiar with Elvis, Frank Sinatra, and Frankie Valli, but I need to listen to the playlist in its entirety. Music has always been a major part of my life. Using music, both recognizable and new (to an unfamiliar American like myself) in relation to the Dirty War pushback and as the common thread between Elvis and Maite helped bridge together the characters’ stories. Reader immersion also heightens when you can identify and imagine the tonal influence specific songs set for certain scenes. Music as a “universal language” is a phenomenal way to encapsulate how music functions in Velvet.

In regards to atmosphere, Silvia Moreno-Garcia herself notes how Velvet is not a thriller, nor a domestic noir, but a noir as the idea of a slow-burn, psychological drama. Characters rise to the forefront over action, which is definitely the case in Velvet. After reading, I’m unsure if I can even consider myself a fan of the noir genre as a whole. I think if Maite’s character came off stronger from my perspective, I would have felt a greater interest. Conversely, Elvis was a well-rounded character who drove home the “noir” ambiance with his personality. Again, the secondary characters came across intriguingly, adding nuance where scenes could have fallen flat. Despite all of my reservations, the ending shocked me in a good way. The payoff for this slow-burn noir book proves immensely satisfying.

Cass: I’m also not a huge fan of the noir genre and I haven’t read many noir books. That being said, I have watched my fair share of noir movies, so it isn’t a surprise that my favorite scenes were those I could imagine in classic black and white movies, like some scenes with Elvis and El Mago, or some of the reunions of Maite and Emilio. I especially liked the two scenes that took place in “La Habana” coffee shop. Those were the moments I felt everything came together in perfect harmony, and when the tension hit its highest point.

I also was pleasantly surprised by the ending. Without spoiling too much, I loved what Moreno-Garcia did with the photos that are central to the plot of the book, and how she ended Elvis and El Mago’s story. It was shocking but it also made a lot of sense when you think about all the things that had happened before (I really like how the screwdriver played a big role at the end). But even when Elvis’ story concluded perfectly, Maite seemed to return to the exact same point she started in, I even think some of the secondary characters have more complete arcs throughout the book.

Katie: Velvet absolutely excels as a noir book when considering how all the minor points and quiet, possibly even overlooked details, coalesce by the ending climax and denouement. Great mysteries lay all the clues right in front of the reader, interspersed sporadically, where you start to question what is important to remember until the interplay hits all at once. The photos were background characters. Objects like the photos or even the screwdriver acted as key components to nearly everything happening. As I said earlier, the payoff works, even if there were stumbling blocks along the way. Elvis embarked on a “hero’s journey” in a loose sense, definitely. His character went through conflict, reward, and ultimately, change. I do feel the same about Maite’s conclusion coming across a bit weakly. Overall, her character was flatter, but still interesting. As for secondary characters, stop me before I spoil El Güero’s character arc! Moreno-Garcia brings all the emotion with El Güero.

Cass: Overall I really liked Velvet Was the Night. As a “chilango” (a habitant of Mexico City), I was amazed by how well the city was painted across the book. The history of “El Halconazo” and the Dirty War is fascinating to me and I’m really glad we are getting stories like this that highlight how crazy things got. Even though some characters felt more interesting than others I felt the book as a whole was a great experience and I would recommend it to any fan of historical fiction and the noir genre. For me Velvet Was the Night is the New York noir-like tale that Mexico City deserves.

Katie: Velvet Was the Night may not have resonated with me from all angles, but stories like this are ones that deserve high recognition. I learned about parts of history and a place I have little to no connection with. Still, Moreno-Garcia writes clear prose to include and inform readers like myself. Scenes were developed thoroughly, with characters interacting in manners that built the tension and kept me guessing at each outcome. Velvet Was the Night will genuinely appeal to noir genre buffs, but it may even win over readers unaccustomed to the genre.

Velvet Was the Night by Silvia Moreno-Garcia is available now at your local independent bookstore or anywhere fine books are sold.

One reply on “Silvia Moreno-Garcia’s Velvet Was the Night: Review”

[…] Velvet Was the Night by Silvia Moreno-Garcia […]