Welcome True Believers and newcomers alike! It’s me, your friendly internet Spider-Dan! Glad you chose to check out our first installment of Spider-Crashers. If you know me, you know how much Spidey means to me. Along with so many people growing up in the 90’s, Spider-Man has been one of the biggest factors of why I am so deeply ingrained in comics. So I can’t tell you just how excited I am to introduce a new series on the site!

Spider-Crashers is going to be articles that focus on Spider-Man’s ongoing series that got a fresh start at Issue #75 with a full new creative team (listed below!) that includes a writer’s room approach to the series with powerhouse artists on the book as well as we head into the Beyond era of Spider-Man. The thing is though that we have 2 Spider-Men swinging around in NYC as our favorite clone Ben Reilly has returned! We wanted the initial article to explore our first impressions of the series with a couple of writer’s unfamiliar with the comics and one big Ben Reilly fan. Now it’s time to swing into our team’s first impressions of the Beyond era!

The majority of my Spider-man knowledge comes from adaptations, so obviously Ben Reilly isn’t someone I know much about aside from him being the blonde, clone Spider-Man in a hoodie.  So I think the real strength of the Beyond era so far has been immediately setting Ben up as someone I care about and making him so similar to Peter in his core drive to be a hero while giving his own unique perspective too.  It would be all too easy to use Ben as a blank slate copy of Peter and avoid the burdens of past continuity but Beyond has struck a strong balance between using Ben’s past while leaving him easily accessible to new readers. 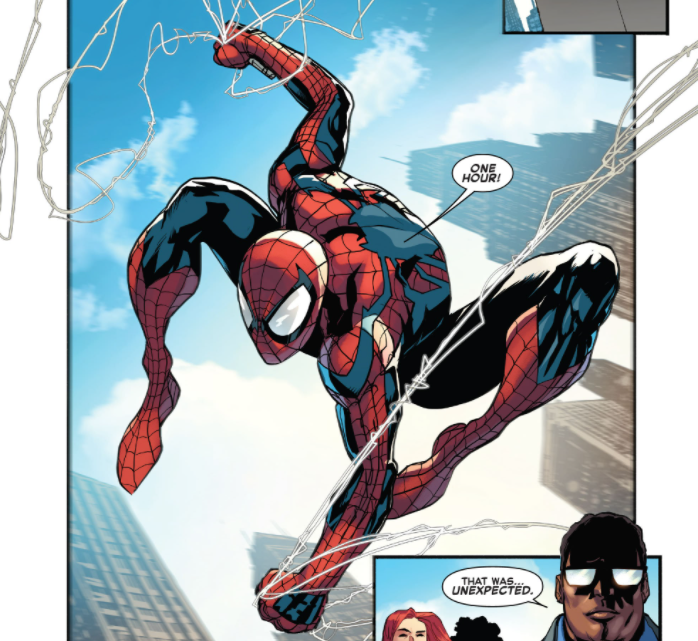 Peter Parker as Spider-Man is something that will never go away, and I appreciate that Beyond doesn’t pretend that he has.  Sure, we have some “Peter on his deathbed” moments but it’s mostly just a way to take Peter out of commission for long enough that Ben can thrive and allows you to really explore the contrast between the two.  Ben’s fancy tech-filled Spider-suit aside the two are pretty similar as Spider-Man, but behind the mask the two really separate.  There’s been a real focus on Ben’s memories so far, or rather Peter’s memories that Ben inherited.  The difficulty on Ben of having lived a life full of people who don’t know he even exists, especially his Aunt May who he remembers raising him is a really interesting angle to focus on and I hope this continues throughout this Beyond era.

The Beyond Corporation themselves are proving interesting so far.  The angle of corporate owned superheroes isn’t necessarily new but it’s an area that still has plenty of room for exploration and with the shady vibes of the Beyond Corporation so far I’d be shocked if they’re as good as they claim to be.

Another strength of Beyond so far is the art.  With two issues by Patrick Gleason and Marcio Menyz and one by Sara Pichelli and Nolan Woodward, it’s easy to say that Beyond has been an absolutely stunning looking era for Spider-Man.  Both artists deliver exactly what you want from a Spider-Man book, the action is fast-paced and dynamic while the unmasked moments are cute and emotive with the Spider-Man humour and charm throughout the whole thing.  There’s really nothing more you could want from the visual design of a Spider-Man book.  The colouring is stunning through the issues too, and Menyz and Woodward enhance their respective artists perfectly.  Beyond also nails the real truth of Ben Reilly.  He may be Peter’s clone in every way but hair colour, but he’s significantly hotter none-the-less (especially when drawn by Sara Pichelli).  I’m a big fan of Gleason’s suit design too, a perfect blend of that classic Spider-Man look and Ben’s iconic 90s suit.

Overall whilst it’s not necessarily a ground-breaking new era, Beyond is delivering the exact sort of fun you want from Spider-Man comics and looking incredible whilst doing it.  It’s the beginning of an era full of potential that I hope gets explored.  Even if we already know it’s only lasting till Spider-Man’s big birthday next year there’s plenty of time (especially with the near-weekly frequency issues are releasing) for this to be a definitive run for Ben Reilly.

For me, the Clone Saga of the 90s was an interesting era. One of the things I loved about it was none other than Ben Reilly, aka the Scarlet Spider. He’s the guy who took on the identity of Spider-Man after Peter retires for a while. What I loved about Ben in the 90s Clone Saga was that he did struggle with the cloning blues. His memories weren’t “his” in a way; they belonged to Peter. But despite all of this, he played a role of contrast to Peter, who was going through his own personal crisis and became withdrawn from his life outside of Spider-Man.

Indeed, that is how I felt when I was reading The Amazing Spider-Man #75. In an almost similar situation with the 90s Clone Saga, Peter’s reeling from the death of Harry Osborn, or at least a duplicate of him, in Spencer’s run (don’t think about it too much). He’s trying to distract himself by going out as Spider-Man and Ben Reilly comes in, telling Peter that he can’t be Spider-Man anymore because of a trademark, which is explained in the issue. It reminded me of Ben upends Peter’s life in the 90s Clone Saga because the question of the “real” Spider-Man returned in the 90s.

Which is why it would have been easy to repeat that scenario, but Zeb Wells, and of the writing of this article, Kelly Thompson, don’t do that. They show that both Peter and Ben have gone through their struggles, like the 90s Clone Saga. The latter seems to be coping better, unlike the former, whose response to grief is to instead go harder into his role as Spider-Man at the possible expense of his wellbeing. But there are certain differences in that while Ben seems to be more stable in comparison to Peter, he does seem to struggle with his return to the role as Spider-Man, especially because he has his own share of commitments to Beyond, the company that hired him to be their Spider-Man.

The possibilities for this status quo are endless, as there are many ways as to how Beyond could go. But I must also temper that with a cautious optimism, as this is a nineteen-part story and we’re only getting started. That’s a lot of issues and I do worry about whether the creative team can stick the landing. I will also admit being a bit nervous about Kelly Thompson’s writing as I have a mixed experience with her comics, but she does a good job here and maybe she’s perfect for Spider-Man. And I like to be more optimistic than cautious here as the story has been good so far.

In terms of visuals, The Amazing Spider-Man #75 and #76 have been a great showcase for Patrick Gleason, whose penciling and inking mesh very well with Marcio Menyz’s colours. We also see the return of Sara Pichelli’s pencils with colorist Nolan Woodard. While I do like Pichelli’s pencils, including her overall look for Spider-Man, I am not particularly a fan of how she sometimes draws his eyes. It does sometimes detract from the story being told. And finally, Joe Caramagna is consistent as always with the lettering, ensuring that the words are readable; there’s a reliability that I tend to associate with Joe Caramagna when it comes to lettering and he delivers on it.

I am aware that I might be premature in my conclusion, but after three issues, Spider-Man: Beyond feels like a return to form for the Spider-Man comics after the poorly written later parts of Nick Spencer’s run.

I’ll be the first to admit that I am the exact opposite of a Spider-Man expert. Though I love Marvel books, I’ve never been a Spidey reader; in fact, these first three issues of BEYOND are probably the longest continuous Spider-Man run I’ve read so far. It’s been an intriguing jumping-on point, though. I know just enough from other comics — and from film and television adaptations — to pick up on secondary character moments, but the book is doing a great job of welcoming me as a reader new to Spider-Man lore and keeping me invested in both Peter and Ben’s journeys as they deal with the shadowy Beyond Corporation.

As Adam noted, the idea of corporate superheroes isn’t a new one. However, the way the creative team is handling the idea has me very interested to see where the story will go next. The idea of a corporation trampling on creators’ rights vis-à-vis Peter’s trademarked identity is particularly appropriate for one of the Big Two comics companies, and I can’t wait to see how far the Spider-Man team is able or willing to go in driving that point home. Also, the issue of ominous, powerful companies manipulating and controlling well-intentioned and/or economically vulnerable people is nightmarishly relevant right now, and I’m just as excited to see where the story goes in its look at class, surveillance, and power.

Beyond (ha, get it?) the analytical side of my reaction to these books, I’m having a lot of fun with them. I love seeing Aunt May be the scariest and most powerful person in the room when she steps up to protect Peter in the hospital. I love Spider-Man being quippy in a fight, and this run briefly gives us a double dose of that as Peter and Ben team up on the U-Foes. And to be honest, I love filling in a part of the Marvel Universe that I’ve been missing out on for quite a while. I knew nothing about Ben going into this book (I had actually forgotten that Peter even had a clone), and I enjoy seeing the small ways that the creators carve out a separate identity for someone who is, on paper, nearly identical to a character whose personality and backstory I have essentially absorbed through cultural osmosis.

BEYOND is off to a good start for a new Spider-Man reader like me. I’m invested in Peter and Ben’s stories, and I can’t wait to see what the Beyond Corporation is really planning. We’re only three issues into a nineteen-issue run, so I won’t speculate, especially with my paltry Spidey knowledge. But with sharp writing, engaging art, and two of my favorite plot elements — creepy corporations and conflicted clones — this is a superhero book that has me eager for the next installment.