What makes Batman Batman? With the hero not being a billionaire anymore and not being able to afford his famous toys, it might be the right time to ask that question.

Just prior to the Joker War, when the Joker stole Bruce Wayne’s fortune, it was revealed the billionaire had been embezzling money through shell companies and illegitimate accounts. That money, of course, was intended to fund Batman’s war on crime, but Bruce couldn´t explain that to the financial regulators and, even if he could, it was illegal anyway. 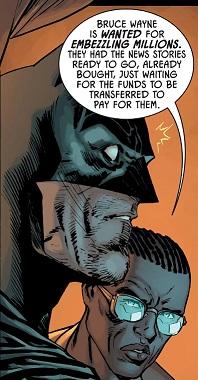 Catwoman then outsmarted the Joker and transferred the fortune to Lucius Fox, who offered to transfer it all back to Bruce. The problem was that, with the embezzling revelation, the USA government was sure to keep an eye on each penny spent and that would make secretly funding Batman’s activities impossible. 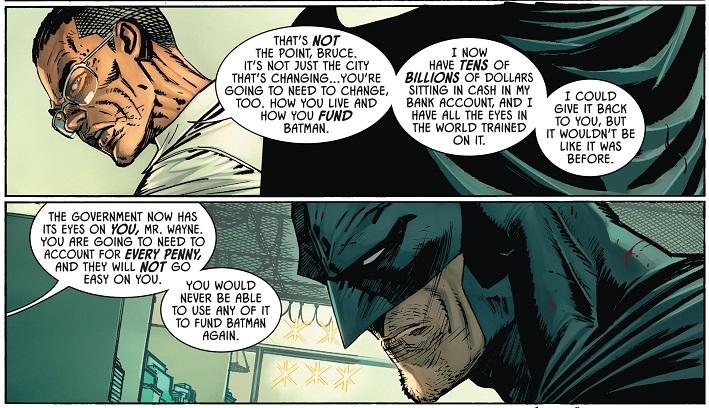 That put the Dark Knight in a delicate situation, in which his operations would need to be less costly and his resources less vast.

And this invites the question of what does this mean for Batman? Who is Batman without his deus ex machina gadgets?  Is he even defined by his money?

Every time I see a status quo change in Batman or a different media interpretation, I always remember that interview Grant Morrison gave to LA Times in 2010:

“It’s really weird. Batman can take anything. You can do comedy Batman; you can do gay Batman…it all works. It’s something intrinsic to the character. It’s so strange and amazing”.

Of course, Batman is famous for paying for the Justice League Satellite in the JL cartoon and for joking that his superpower is being rich in the Justice League movie, but stories in which his mega-expensive tech isn’t all that important aren’t rare. Just a grappling hook and some batarangs and he’s ready to go. 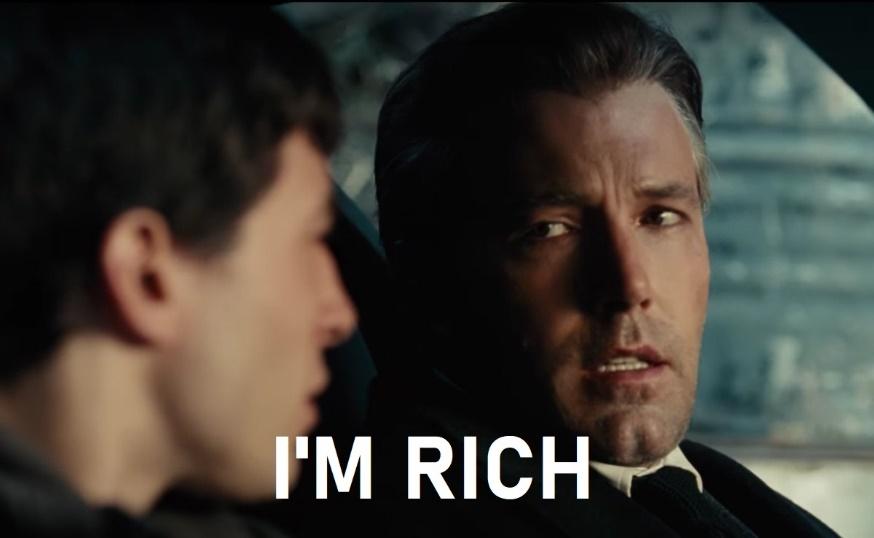 “Batman isn’t interesting because he has a cool car. It’s great that he has a cool car. But he’s interesting because he straightens the world out. And he brings order to a very chaotic world. Especially when you’re a child. You need somebody, even if it’s a fictional character, to tell you that the world makes sense and that the good guys can win. That’s what these heroes are for”.

Miller even writes that Batman in his seminal work “Year One”, in which we see a Batman with no technology, outside of a sonic device designed to attract bats. In Alan Moore’s “The Killing Joke”, considered one of the best Batman stories ever, he doesn’t use any kind of tech at all. In “The Long Halloween”, another beloved story, Batman doesn’t use any expensive gadget either.

During the 90s, in the famous Alan Grant run, Batman might have used special suits and fancy computers, but they are mostly a device to accelerate the development of the plot as opposed to an actual necessity or an integral part of the character. What is essential to that era is how the rich hero reacts to the constant social and political issues present in the stories: there is an extreme effort to present Batman as a compassionate person, using his money to help people in need.

“Because Batman is human. He’s experienced the full gamut of human emotions – grief, fear, rage – so he understands how people feel. Plus, he’s a self-made hero. He didn’t need an alien with a power ring, or to be born on a high gravity planet, or have an accident with chemicals. Instead, Batman took human powers to their limit with no external help (except for Alfred, perhaps). It just made sense to me that he would be a man of huge compassion – not obsessed to the point of insanity which some writers have proposed”.

Grant’s Batman is probably the most compassionate and least emotionally detached version of the character we’ve seen in the Modern Era. While it is very interesting seeing him engaged in social justice activities, it is sometimes very easy to overlook the role rich people have in the unequal distribution of wealth. There is a danger to reading stories that humanize the rich and save them from scrutiny, even though that isn’t the writer’s intention. I will come back to this in a moment.

What Grant brings upfront in his stories is Batman’s heart. That is the foundation for Bruce Wayne to become a hero. Alan Grant clearly sees Batman not as a selfish figure who dresses like a bat to avenge a personal tragedy, but as an altruistic hero who doesn’t want what happened to him to happen to other people. That’s why he trained to be one of the world’s greatest martial artists and detectives: for other people, not for himself. But with all that altruism, it’s difficult not to question his relationship to wealth distribution. A gold heart without sharing is an awkward capitalist invention.

If we look at the reason behind James Tynion IV’s creative decision to take away Batman’s money, we will see that there is a plot reason and there is a civic responsibility reason:

“The hero’s endless fortune doesn’t just invite questions about his civic responsibilities, it’s also come to function as a deus ex capitalism, handwaving any level of property destruction and excusing any reveal of a new gizmo or vehicle.

Batman’s money allows writers to transform him into a grim version of Silver Age Superman, who could travel backwards in time by accidentally flying too fast. And while that may be a realistic depiction of the power of a multibillion-dollar fortune, it’s not particularly good for creating high stakes comics.”

The plot reason has more to do with the writer himself, while the civic responsibility reason speaks more of Batman as a character. Is he socially responsible? Getting rid of his fortune is a smart way to avoid that question, but that’s not what I am going to do. If the heart is part of him being a hero, then we should ask if Batman’s heart is in the right place.

Some characters like James Gordon expressed concern that Batman might attract his mentally ill villains, but what about the common villains: the robbers, the thugs, and the muscle for the crime lords? 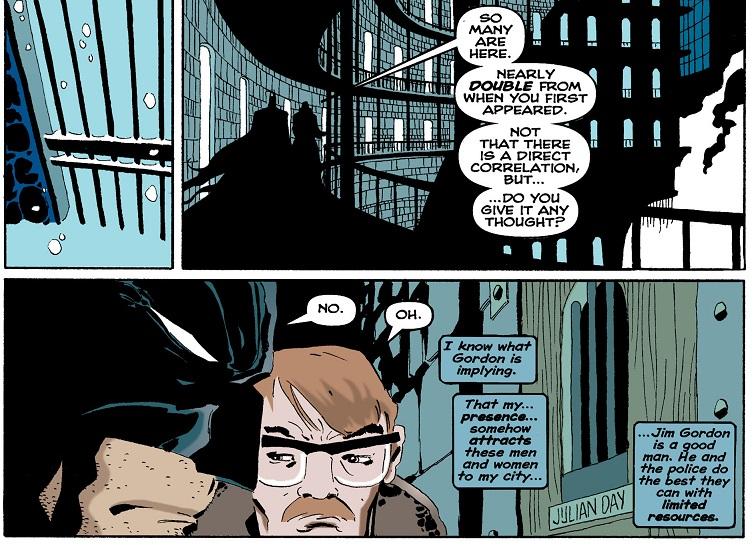 Some scientific studies suggest there is a relationship between income inequality and crime.  When money is concentrated in the hands of a small number of people and a great number of people in need, the result is a great crime rate.

The French economist Thomas Piketty discussed in his best-seller book Capital in the Twenty-First Century (2014) the history of wealth and income inequality in Europe and the United States since the 18th century and demonstrated how an unequal distribution of wealth causes social instability.   The problem is that the concentration of wealth in the hands of the few means a lack of wealth in the hands of many.  Billionaires are made out of the exploitation of labor, oppression of marginalized people, and the neocolonialism of underdeveloped countries.

This means that for Batman to be a billionaire, several Gothamites, and people everywhere there is a Wayne Corp., need to be poor and if there is poverty, there is crime. So with that said, it stands to reason that the Wayne family wealth is partially responsible for Gotham City’s crime rate.

When Senator Bernie Sanders tweeted in 2019 that billionaires should not exist, he brought to the general public a discussion about the moral question behind the existence of super-rich people.

Comics have always been political and a product of their time, so as society’s view of super-rich people starts to change, maybe Batman’s relationship to wealth needs to change too.  If part of what makes him a hero is his heart, it should be in the right place and associated with good characteristics.

Maybe, if we don’t see more social responsibility, Garth Ennis’s view of Batman could one day become the mainstream view:

“What we’re talking about here is a billionaire aristocrat who beats up poor people, as well as the mentally ill. I don’t know what that has to do with a code of honor.”

I don’t intend to give a definitive answer to what makes Batman Batman, but I definitely think it’s important to analyze his heart, because what is a hero without a heart?

With all that in mind, we should ask ourselves: should Batman ever be a billionaire again?