Trauma. That was my initial feeling standing outside the blue and yellow rental store. Years ago I was a video rental clerk at BlockBuster, issuing late fees and offering rental suggestions. All of our “team members” were expected to be subject matter experts in at least one film genre and I  chose horror/suspense. From 2007-2010 I used my free weekly rentals to become acquainted with the works of Stephen King, Rob Zombie, Lucio Fulci, Dario Argento, Sam Raimi, James Wan, Wes Craven, John Carpenter, and Alfred Hitchcock. I watched a lot of horror movies but completely side-stepped The Texas Chainsaw Massacre Part 2.

I won’t lie — the selection of available movies in GateBuster was sparse by the time I got there. Slim pickings, really. The only stand-out available to me was this black comedy sequel to Tobe Hooper’s seminal classic. It was likewise directed and scored by Hooper but Part 2 always had a bit of a bad wrap for being, well, different.

Just compare the film posters and you’ll get a sense of the tone shift. The first film features the infamous door Leatherface would drag his screaming victims through. Whereas Part 2 parodies The Breakfast Club. 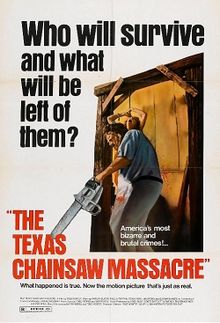 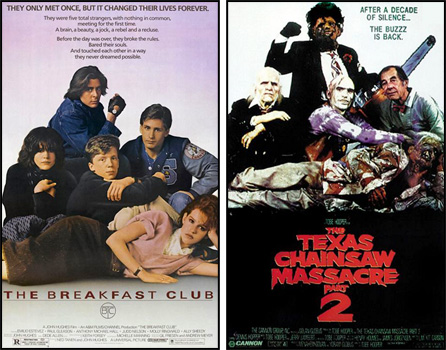 Tobe Hooper had no interest in making the same film twice. Twelve years had passed and too much had changed. The classic was a pseudo snuff film that influenced numerous slashers to come and Part 2 would ignore the gritty elements to hype up the more corny stuff hidden in the original. Namely, the Sawyer family.

Instead of featuring a group of would-be victims in the wrong place at the wrong time, Part 2 kicks off with Leatherface and Chop Top chasing down victims out in the wild. Following 80s slasher tropes, we see two belligerently drunk high-school seniors, Buzz and Rick, being dickheads in a way that all but confirms their imminent deaths. They repeatedly use their very 80s carphone to harass radio DJ Vanita “Stretch” Brock, who is somehow without the ability to hang up on prank callers. She records them being attacked by the chainsaw-wielding Leatherface before the car crashes.

The next day “Lefty” Enright, a former Texas Ranger who has been investigating the chainsaw murders for over a decade, shows up at the crime scene to brood. The local police think he’s a joke and they’ve been suppressing any word of chainsaw murders as accidents, much to his chagrin. He gets contacted by DJ Stretch with a copy of the audiotape of the chainsaw attack. For no reason he turns her down, leaving her to the much more mundane radio coverage of a Texas/Oklahoma Chilli Cookoff. It just so happens the winner is Drayton Sawyer, the patriarch of the cannibalistic Sawyer family, who says the secret to his award-winning chili is to not “skimp on the meat.”

Lefty goes on a spending spree at the local hardware store, testing out several large and small chainsaws on a massive log. The whole sequence is surreal in how awkward it clearly is for the owner at first before he starts cackling while watching Lefty go to town. It’s also strange to me that Lefty’s weapon of choice for any future chainsaw fights is another chainsaw and not, you know, a gun. When he’s found the perfect saws he contacts Stretch to get her to play the tape of the killing live on the radio, seemingly oblivious to the fact that it would attract danger. Leatherface and Chop Top inevitably drop by the station and all hell breaks loose.

We get some hamfisted comedy, our first real taste of gore, and even an awkward infatuation between Leatherface and Stretch. The setting shifts for the remainder of the film to the Sawyer homestead, which in this film is not a remote ranch house but an abandoned carnival ground decorated with furniture made of human bones. Ed Gein would feel right at home. When Lefty shows up to save Stretch the film goes from being kinda shitty to an absolute gem.

Cannibalism. Wearing other people’s faces. Chainsaw duals. Female empowerment. Part 2 has it all in the last thirty minutes. Any misgivings I had about the film’s production were obscured by my cackling at its triumphant final act. Honestly, the way Part 2 popped off made me feel like an idiot for being a horror snob and ignoring it back when I worked for BlockBuster.

If you haven’t given The Texas Chainsaw Massacre Part 2 a chance because, like me, you were thrown off by the tonal shift to a comedy slasher, you owe it to yourself to find a copy and watch it as soon as humanly possible. I, on the other hand, gotta rewind this VHS tape and get it back to GateBuster before I (ironically) am the one slapped with a late fee.