What do you get when you mix vinyl records, an amicable serial killer, and a Midsommar-like cult together in an underground bunker? Vinyl #1 is the debut of the six issue miniseries from Image Comics. Plastic creators, writer Doug Wagner and artist Daniel Hillyard, reunite to spin their sick horror record around on the turntable again. Eisner-award winning colorist Dave Stewart and Harvey nominated letterer Ed Dukeshire round out the Vinyl team.

The comic opens on a violent scene ripped straight out of a slasher film. Doug Wagner and Daniel Hillyard waste no time in setting the tone for their bloodbath comic. The readers are inserted in media res to the twisted action occurring between protagonist Walter and his friend, Dennis. Walter places a teddy bear mask upon his head before turning on a record. Music fills the air as a tied-up Dennis bargains for his life. Unfortunately for Dennis, the notes of Ella Fitzgerald’s Whisper Not induce Walter’s serial killers’ tendencies. Finally, the scene cuts away just as Walter snaps to the sound of the vinyl record, snatching a bloody axe from the hands of a grotesque inhuman woman about to hack Dennis to bits. 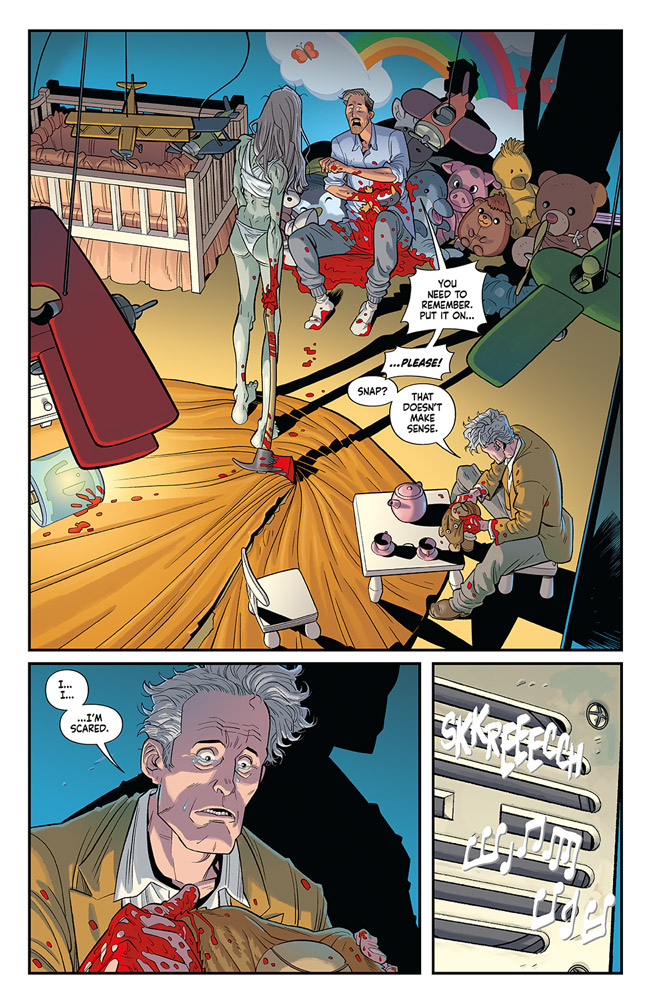 Wagner lends portions of the plot to characterization that charges Vinyl’s appeal to pathos. After the opening gore-fest, the story flashes back two weeks prior. Here, Wagner startles readers through an essential character re-introduction. We gain insights into the protagonists as they meet outside a coffee shop. The encounter between the two older men propounds dialogue both comedic and authentic. Walter the ruthless, yet surprisingly charming serial killer obsessed with vinyl and music, gushes over his perceived friendship with retired FBI agent, Dennis.

Tone shifts can be jarring, but Wagner’s dialogue and the the artist’s visual acuity balance the see-saw of terror and humor in Vinyl #1. Somehow, Wagner writes a psychotic murderer as an antihero readers will be drawn toward…liking? When Dennis, undercover with the FBI, confronts Walter about his crimes, Walter’s viscerally pained expression exudes regret. Immediately after spurned sunflower-farmer/cult leader Madeline forces Dennis to come along with her to face punishment in her underground horror bunker, Walter abandons everything to return his best friend to safety. Walter is a killer, yet values his interpersonal relationship with Dennis. Thus, the reader’s investment in Walter completing a successful rescue mission now threatens to displace previous feelings about his wrongdoings.

Vinyl #1 is a revenge story, but also a story that questions the division of greater and lesser evils. Walter’s character subverts expectations at every turn. Daniel Hillyard illustrates Walter effusively. The sparkle lighting up Walter’s eyes when receiving a vinyl record from Dennis works marvelously in combating the gag-worthy imagery of Walter’s misdeeds. As Walter’s crinkled-face contorts or tears slip from his corneas, emotions run wild while readers witness the visible change from vinyl-collecting elderly man to limb-hacking serial killer. Gore drenches the pages in close-frame panels, incurring a disturbing intimacy between the violence and the reader.

Effectively, narrative tone and illustrations perform a beauteous symphony with the addition of Dave Stewart’s colors. Stewart’s pastel aesthetic lightens the atmosphere outside of the murders. Panels take on a look of clarity, as if readers are viewing the comic through a fantasy-world lens. The effect is pristine, tempering the vermillion splashes of red used only to depict blood. Indeed, Stewart’s warm colors allow Hillyard’s line work to flourish further, expanding on the page like sunflowers reaching out to the sky. 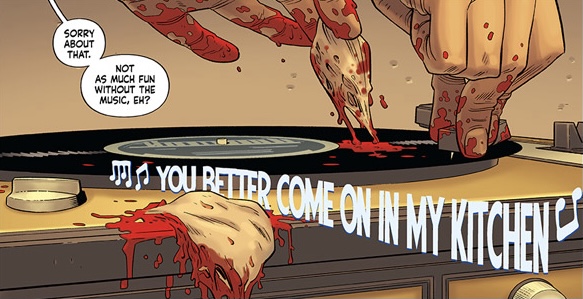 Vinyl #1 promises a gory extravaganza from page one; an introduction that will either entice or deter readers based on their sensitivities. The story descends further into a spiraling madness. You’ll turn each page enraptured, as repulsion over blood-spatters and chopped off body parts is assuaged by delightful curiosity. Additionally, the thematic nuances about morality force readers to think outside the constraints of binaries. If their goal was to produce a horror comic oozing with a story so entertainingly disturbing, you won’t be able to stop replaying the scenes inside your head like a catchy tune, Vinyl #1 remains a victorious enterprise. Akin to the resilient sunflower in Allen Ginsberg’s quoted “Sunflower Sutra” poem, I am certain this comic series will grow in success.

Graduate of UCF Online with a B.A. in Creative Writing.
Reading anything I can get my hands on. Wishing I could write about every single comic I consume.