Can I be honest with you? I don’t know how to start this piece. It’s difficult to encapsulate the feeling of my experience with The Expanse’s sixth and final season into a few snappy words; a hook that cleanly ties together all of my thoughts and presents a solid argument for why it works as well as it does. Truthfully I don’t have the right words to make such an argument. I could tell you all about the new season’s tight pacing, its driving emotional core, its gorgeous cinematography and sound design. All of this is of course phenomenally crafted, living up to and exceeding expectations set over the course of the series so far. The true achievement of the show’s production, though, is that it’s more than the sum of its parts. I can’t say what central thesis I could put forward to adequately demonstrate the unbridled passion that drips from every second, or the level of care from every aspect of production that makes this final season the love letter to the franchise that it is.

What I can say though, with all honesty, is that I cried when it was over. If you’ll forgive my little self-indulgent soul bearing, I think my hope for this coverage is to show you exactly how I got to that point.

One word keeps rattling around in my head after watching “Strange Dogs,” the first entry into the final stretch of The Expanse: gravity. Every aspect of the episode has a palpable tension to it. We meet the solar system at its lowest, battered by Marco Inaros’ Free Navy and trying to survive the weight of collapsing superpowers. We meet the Rocinante crew in a similar space, trying to hold the system together with the same energy they’re using to keep themselves together after Alex Kamal’s untimely demise in last season’s finale. It’s in this central conceit of grief and solemnity that the episode finds its footing. While the world pushes inexorably forward, breaking and reforging the status quo at every opportunity, the stoic human subconscious remains. The tone and creative direction of the episode reflect on this in their own way. The show feels as if it revels in its empty space. What could be written as exposition is instead left unsaid, the web of human emotion a rock in a world where science is constantly shifting. A markedly sparse and subtle score allows reverence for the emotions of each tense moment, yet deftly propels the action forward when needed. Color direction tends to skew darker, trading the show’s trademark blue and red tones for a more shadowy environment. I noticed this especially in scenes aboard the Rocinante, and surprisingly found more direct white light from the ship’s panels, bringing contrast and depth to the nuance of the moment. 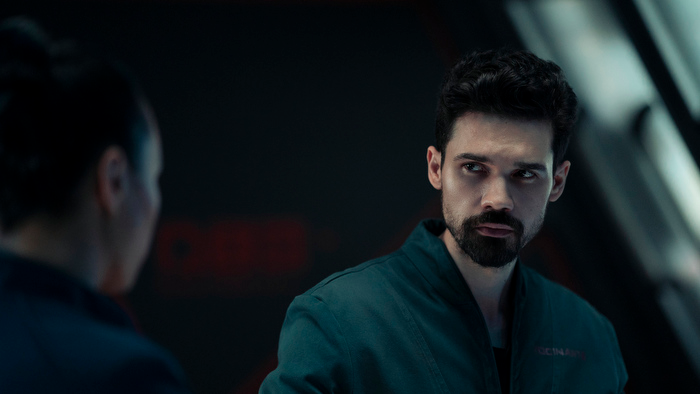 I think the show has earned this sense of introspection. Over its five seasons, The Expanse has woven its threads of human interaction into a galaxy-spanning web. Once archetypal characters have beat by beat become complex: Amos, the brute who has no conscience but will lay down his life for the innocent; Naomi, who frankly had no distinct character outside of her relationship with the men in her life, now grown to take control in her own life and define herself by her own extraordinary ability. On his and Wes Chatham’s podcast Ty and That Guy, executive producer and co-author Ty Franck talked about his approach to writing characters in The Expanse as intentionally contradictory. He explained that giving characters these traits that don’t necessarily make sense at first glance deepens their personality and relationship with the world. Within these complex and often contradictory characters, we begin to see a unique image of humanism and its own relation to the larger world.

There’s a recurring motif in the Expanse novels that human nature is by definition… human; any action done by humanity is innately and uniquely human simply because it’s been done. It’s often used as a calming idea: humanity has survived thus far and humanity will continue to survive until it doesn’t. It’s not necessarily a promise of good things to come, but it allows you to change your perspective, to push forward with all you have until you can’t and hope that you’ve left a better world in your wake. As it unfortunately implies, however, this laissez faire attitude toward morality can also justify atrocities and allow for innocent people to be hurt in another’s push for control. This championing of the human spirit is what drives us forward, and what lets the weak be preyed upon. It is the drive that led the people of The Expanse outward toward the stars, and forced Belters under the boot of first Earth and Mars, then the Free Navy. Now this is obviously a personal evaluation everyone makes for themselves, but to some this can seem cynical. The thought of humanity living and dying by the strength of its weakest and most selfish link can obviously be distressing. To hear Ty Franck speak on the subject, I think he does fall into that cynicism at times. However, in these conversations (again on Ty and That Guy) Wes Chatham (who portrays Amos on the show) points out that he sees The Expanse as espousing a philosophy of faith. The faith isn’t necessarily in a higher power or even a religious context, but rather in shared humanity, in the actions we take every day to help each other, in the structure of government to keep moving and help those they serve. The duality of this thesis plays out in every interaction of the show, coloring the actions and motivations in shades of gray. 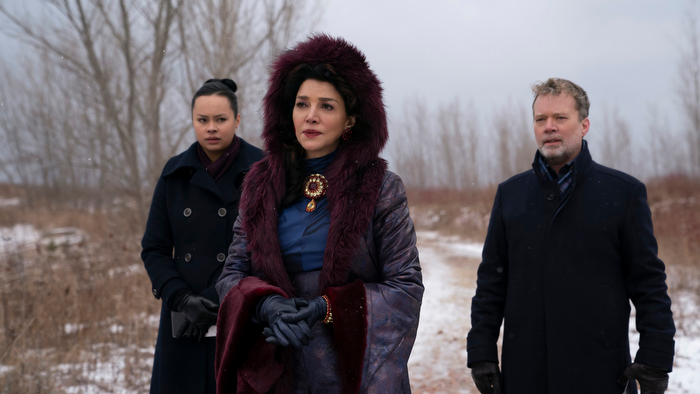 The most straightforward example of this gravity and somberness is shown through the eyes of Chrisjen Avasarala. Framed against the literal site of her own failure, an asteroid strike zone, she bears the burden of her own limitations and the disaster she blames herself for as a result. She mourns for the billions dead and displaced, for the evil put into the universe and made to take root in humanity’s heart. In her reflection, Avasarala laments the loss of life, and indeed any loss of life, but to my mind still does not fully recognize her role in it. The severity of the situation we find Avasarala in is daunting alone, but the scene is elevated exponentially by Shohreh Aghdashloo’s performance, rock solid as ever. She gives the episode a spine, allowing for impressive reflection on the cost of the war games being played. Her voiceover at the episode’s close both ties the narrative together and drives it forward. In her zero-G epiphany, she also elegantly demonstrates a paradigm shift on a larger level, demonstrated throughout the episode.

Throughout most of the first episode and nearly the rest of the season, the forces of Earth, Mars, and the Rocinante are confined to their ships, taking the war to the Belt. Away from their home planets and adrift on these ships, they are on the offensive in a territory that is not their own. The literal lack of ground under their feet and the microgravity of the ships take away that fundamental force of gravity that gives them cultural identity, subtly disorienting and dispiriting the Inners. Meanwhile, Marco Inaros has taken Ceres Station, and with it its spin gravity. Now, you could (and I would) note the false nature of this gravity and how it mirrors the artificiality of Marco’s triumphs. Where Marco sets himself up to claim victory no matter the outcome, he is giving the same lack of true stability as the station itself. If you really want to look into it, you could point out that the levels of spin gravity differ based on your position in the station, leaving some completely lacking, just as his crusade against Earth and Mars promises Belter supremacy yet leaves anyone outside of his clique in the dust. The lack of substance beneath the Free Navy’s feet is a metaphorical goldmine, but the fact remains that Marco does have gravity. Marco does have Ceres. He has that winning smile, the warm loving facade that promises all will be well if you just trust him. Something is working. 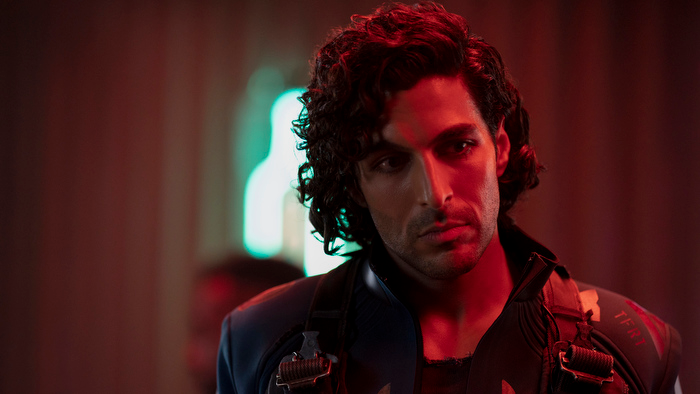 If I had one complaint about the season premiere, and the season as a whole, it would be that the adaptation of Strange Dogs feels incredibly thin. Spaced out across six episodes, the novella story never truly gets interesting for long. While I do LOVE that Laconia is being teased and expanded upon (the sweeping shot at the beginning of the episode made my heart race) I can’t help but feel that it could have been integrated better into the fabric of the story or fleshed out as its own subplot. As soon as any interesting action happens on Laconia, it’s sequestered as a cliffhanger to be resolved next time. While I understand the serialized nature of the short story, that nature tends to interrupt the pacing of both it and the main story of season 6. That said, I will never be upset by the hope that the later books in the series will be adapted at some point, and boy does this give me hope.

I’ve been trying to nail down why The Expanse is so special to me. It scratches a hard sci-fi itch that I’ve found most modern work doesn’t come close to (with the noted exception of Three Body Problem, a must-read for any Expanse fan) and the found family aspect of the Rocinante’s crew is something that’s resonated with me more and more as I revisit it. I think the biggest thing, though, is that the show doesn’t talk down to you. The plot is endlessly convoluted, but expects you to untangle it yourself, and then rewards you when you do. Even emotionally, the show pulls no punches. Yes, there are obvious patterns to each character’s behavior, but the intimacy shared by the characters is palpable. At least for me, the opportunity to discover these nuances and unravel the complexities of intergalactic politics while somehow building a functional knowledge of interstellar travel procedures is incredibly fulfilling. The care that is taken with this dialogue between creator and audience is incredible, giving me ample reason to engage on every level I can.

I’m happy to report that this feeling of unbridled confidence in the viewer and pervading sense of joy is still present as The Expanse moves into its swan song. The entire production team is firing on all cylinders, and I can’t wait for you to see what’s still to come.