I have had insomnia since I was 17 years old. Every night I wake up around 2:00 am and I’m not able to go back to sleep until around 4:00 am. During that time I do all sorts of things but almost always, I end up browsing Instagram. It was on a night like this that I found my way into Blackwater and stumbled into the night crew.

Darker Further Down (DFD) is a comic series by Sarah Navin (@coinswallow on instagram) that explores the creepy things that happen in the peculiar town of Blackwater (but don’t worry, creepy stuff happens anywhere). The main characters are a couple of cousins (or at least they think they’re cousins) named Libby and Elaine that happen to live in a duplex that has a family living inside the walls, a news anchor that speaks to them through the tv, and a man with a mysterious face renting out the attic. The town also has some interesting people in its midst like Elaine’s crush, the girl that lives at the deep end of the public pool, and the regulars at the diner that wear cat masks.

So there I was 3:14 am, walking into Libby and Elaine’s stuplex (stupid dublex), and when faced with the decision of staying or escaping, I undoubtedly decided to stay. As a fan of all things horror and creepy, finding a comic like DFD was like finding a strange victorian portrait in your basement, it’s pretty fascinating but a bit unsettling. What makes DFD a particularly great Victorian portrait is that it knows it’s really creepy and it has fun with that.

Sarah combines the horrifying and the absurd to create incredibly funny and creepy stories. The scenarios that each comic presents are genuinely creepy, but it is the reaction of the character that makes them really enjoyable. And that’s where the strength of this comic resides, its characters. Libby and Elaine are just like those weird friends you had in high school (maybe you were that weird friend) that are cool and chill, but always have something going on and have a threatening aura to them. For me they are the perfect mix of relatable and totally alienating. The rest of the cast is also fascinating and some of the best twists in horror tropes, a personal favorite of mine is pool girl, but I also have a soft spot for Thompson, the pigeon man.

Okay, first of all, a very important question: What’s your favorite sandwich?

Does my cat count? His full legal name is Ham Sandwich. “Hammy” to his friends, “Hamityville Horror” if he’s being nasty.

What are some inspirations for Darker Further Down that might let new readers know what to expect?

The Twilight Zone has got to be my big one, with the range from wholesomeness to abject horror. Rod Serling owns half my personality. And Courage the Cowardly Dog is always in the back of my head. But I pull a lot of ideas from real-life unexplained events, too! I’ve stolen all kinds of details from the Missing 411 cases.

I was not going to ask this, but I’m extremely curious. While writing this piece I did the “Which citizen of Blackwater Township are you” quiz (I’m a member of the family in the walls btw). Have you taken your own test? What character did you get? Does it feel accurate?

(Hey, welcome to the walls!) It’s always a toss-up when I take the quiz; I get something different almost every time. I don’t think there’s a single character in the comic who’s not infused with some aspect of myself. I’ve got Elaine’s appetite and the Big Man’s neurosis. But sometimes you just feel like a corpse in a chlorinated public pool, you know?

Okay, technically those were three questions, but I feel they were easy ones, so I’m counting them as one. Anyway, talking about characters, what do you think is essential when creating a character?

Ooh, good question. My goal is for each character I create to be the protagonist of their own personal story, even if that story never sees the light of day. Every single player should be deserving of a spin-off. I don’t want Libby and Elaine to seem like beacons in a fog of less interesting bystanders; I want them all to feel like complete, compelling people who reveal a little more about each other through each interaction.

Hey, thanks! This is my first foray into visual storytelling, so I guess it’s also my first time sticking to a consistent style. I’ve never really had one before. I wanted something a little messy-looking and forgiving of my limited drawing skills, hence the lines for noses and total abuse of the fill tool. And personal details are dear to my heart – backgrounds scare me and I know nothing about color theory, but things like moles and tattoos and body hair are where I get to put the extra love in.

Even though some pretty weird things happen at Blackwater, your comics somehow feel kind of… relatable. What do you think makes the creepy and the mundane mix so well?

I think we don’t give ourselves enough credit for how much weirdness we endure on a day to day basis. Humans will adjust to the most absolutely buck wild stuff, especially in familiar spaces. If you had a closet door that opened by itself at the same time every night, would you call a priest and move houses? Or would you buy a plastic latch for it? We’re all just out here acclimating to things that we used to think would kill us.

When you first thought of making comics online, were you always set on doing horror? Why horror?

Everything I make has at least a little thread of creepiness to it. It’s the one genre that can consistently keep my attention, even when it’s being executed poorly. I’m always waiting for the part of the story where things get uncanny or uncomfortable. I also think it’s a terrific vehicle for other subjects: grief, humor, tenderness. If I drank wine, I might use a wine metaphor. Horror has a way of complimenting non-horror.

What would you say are the overarching themes of DFD? Have they changed with time?

It’s always been about the resourcefulness of struggling people, you know, the ancient art of totally winging it. But I’ve also ended up with this cast of characters who are basically their own worst enemies. They’ve all got habits or principles or coping mechanisms that keep leaving them vulnerable to the things that go bump in the night. I was surprised at how tertiary the actual “monsters” ended up being – the central conflict is really more about the temptation to let them inside.

Libby definitely takes after my best friend Rose, who’s been tolerating me for like twelve years now, and our dynamic is pretty similar to the cousins’. But there are bits and pieces of all my other loved ones in there too, I think. There’s an unconditional, unassuming kind of love between them that I know I must have modeled after my relationship with my mom.

Your first post on instagram is of March 2020, what is the biggest lesson you have learned in a year of making comics?

This is a lesson I have to learn over and over again: I’m never going to be able to predict what content people are going to enjoy the most, and it’s counterproductive to try. I was caught off guard by how well-received my longer comics were! I figured they’d feel arduous and self-indulgent to anyone besides me, but they turned out to be the more popular format. I keep having to remind myself that the ultimate goal is to write something I want to read, even if half the comments end up being “can someone PLEASE explain what the hell is going on?”

If you had to make a meme to persuade people into reading DFD, what would it be like? (extra points if you make the actual meme, I mean, I’m not grading you… but it would be fun) 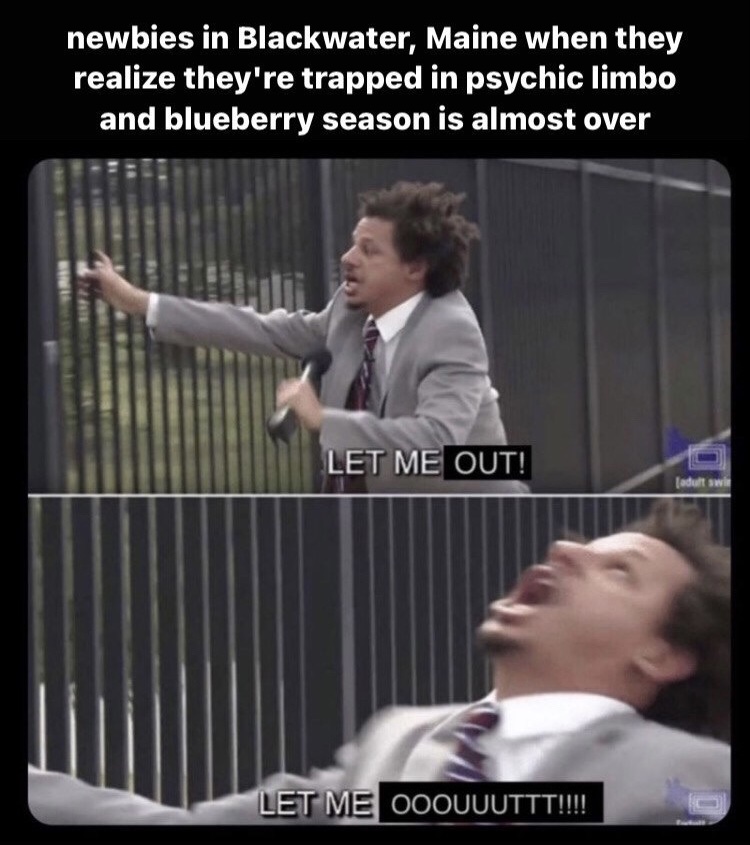 One reply on “Darker Further Down Interview: The Funny Thing About Darkness”

Love both this article and Sarah’s DFD 🖤