GCer’s Titans coverage returns with myself (Bree) and my partner, Jon! We’ll be covering each episode release as they drop. The show has a lot of sentimental value to us on a very personal level, our coverage will be what is essentially written conversations with two sections; a very spoiler-free approach followed by a spoiler centric one (with a few jokes and memes, as titans S3 is headed towards very meme-able territory). Without further ado, our spoiler-free segment begins here;

Bree: Episodes 1-3 of season three kick off an amazing introduction to Gotham and the new players on the board, while giving a little more time to recurring characters that they’d neglected in Season 2.

Jon: The Team finally felt like a team! The suits are really great, especially Nightwing’s. They broke up some of the plating that had originally been a single piece on the prototype reveal. The music feels like an upgrade as well, very fun and dynamic. I find myself humming bits and pieces often. Oh, and they didn’t have to show Brenton clip the escrima sticks into his belt, but they did that for us. Lastly, Red Hood makes for a good antagonist after Deathstroke’s exit.

Bree: What is it about Curran’s approach to Red Hood that stands out to you?

Jon: The intensity, from the way he speaks to the way he moves. The choices in his fighting style compared to Dick are so interesting to watch. The scenes in which he switches to using a knife are some of my favorites, there’s an intent to inflict as much damage as quickly as possible in those swings. This is a person who tries to make every blow a killing stroke. Dick by comparison feels like there’s more intent to distract and subdue.

Bree: I gotta talk about Crane too. I have never wanted to smoke with someone so badly. All the choices they’ve made thus far in regards to deviating from the books have been good, but everything about Crane has been gold. Also, a very interesting way to set up Jason’s origin in this universe as opposed to how it was set up in Hush. Any comments on the new additions of Barbara and Tim?

Jon: The casting choice for Babs is perfect! It’s nice to see a Barbara with some experience under her belt, rather than another year one story. The little bits of Tim thus far are promising.

ON TO SPOILERS AND OUT OF CONTEXT MEMES

Bree: Why did Dick walk into that interrogation room and his back half walked in 5 minutes later.

Jon: Conner needs to register his chest as a lethal weapon. Man of Steel tiddies. Also Jason with the bag of heads. Literal chills.

Bree: Yeah, I’m warming up to the edits they put on Jason’s voice when he dons the helmet. I also very much appreciate that Conner is allowed to be smart, I dislike when he’s treated as just a pile of muscle. And Holy Heck his reaction to Hank’s death really got me.

Jon: Deeply surprised that Bruce actually put the Joker down.

Bree: Yeah, me too. It’s a very Miller Batman. Overall, the approach feels like an almost “Elseworlds” take. If the 80s Titans books are the greatest potential of good the team can achieve, what does a Titans team look like when Dick is paired with a Bruce that never gets a complete handle on his trauma? How does that trickle-down affect the whole team? Lots of interesting potential from that angle, I think. Oh! And the hints at Carrie Kelly, Stephanie Brown, and Duke Thomas? I screamed.

Jon: I didn’t think I’d see a live-action Carrie even hinted at in the year 2021.

Bree: To be honest, I personally have a hard time liking Barbara in most things. She’s just never been a character “for me” – I do appreciate her as very important rep for disabled folks though. Titans’ approach to Babs is perhaps one of my favorites, the actress has a great presence and her keen ability to zero in on exactly what Bruce and Dick are lying to themselves about is great. I also appreciate that there is no cattiness between her and Kory, as certain books have done in the past.

Bree: Lastly, I want to touch on Gar in season 3 thus far. He’s still very much in a supporting role and is often used to play off of other characters. Which, I’m personally perfectly happy with. I can understand the criticisms about him not having his own arc per-se, he’s often used as an “errand buddy”. Ryan Potter is so fun and has such great rapport with everyone that I don’t mind. He and Conner in particular are nearly attached at the hip and get in some great jokes between the two of them. To conclude our coverage of Episodes 1-3, here’s a lil Con/Gar meme I drew. See you guys next week for episode 4! 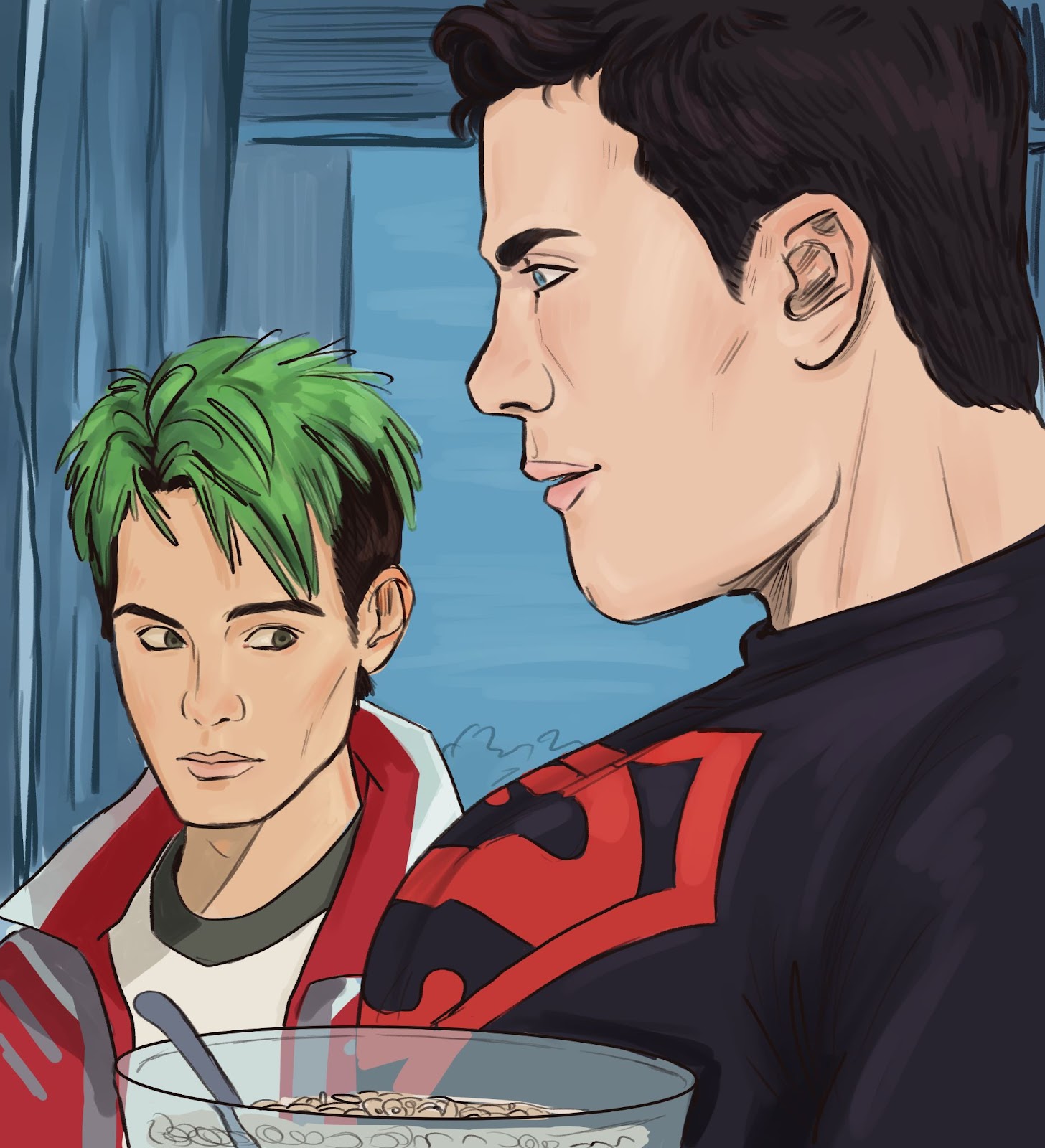